Posted on Nov 19, 2007 in Bento, Fish or Seafood, Freezing, Lactose Free, Meat, Phyllo or Pancake or Other, Recipe | 38 comments 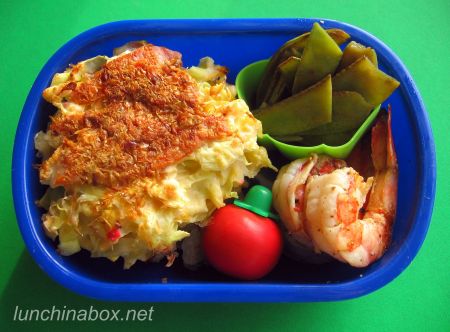 After moving back to the States from Japan years ago, one of the first Japanese foods I craved was okonomiyaki. Essentially a cabbage pancake with a variety of meat or seafood mix-ins and toppings, okonomiyaki is a specialty of Osaka, my old stomping grounds. I’ve got fond memories of little mom & pop okonomiyaki restaurants where customers make their own okonomiyaki at tabletop griddles (photos below), so I set out to recreate the flavors I had there, taught by an Osaka boyfriend’s mom. Okonomiyaki now makes a regular appearance at my table, and I like being able to have a taste of Osaka whenever I like, without depending upon local San Francisco restaurants that don’t make it the way I remember.

Morning prep time: 0 minutes, as I packed everything the night before (4 minutes packing time). I had previously made a batch of mini okonomiyaki when making okonomiyaki for dinner, and froze all of the mini okonomiyaki after wrapping each in plastic wrap and placing in a freezer bag. I put a frozen okonomiyaki right in the bento box the night before and let it thaw naturally in the refrigerator, but you could also thaw them quickly in the toaster, toaster oven or microwave. 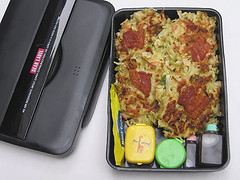 My husband’s lunch: This lunch from last year is an example of an adult portion of four mini okonomiyaki with all of the condiments I like (okonomiyaki and Worcestershire sauces, aonori, katsuobushi and a mayonnaise packet). Packed in large 940ml mens’-style Dear Label bento box with chopsticks built into the lid (by Asvel), and removable divider (removed to fit the okonomiyaki). 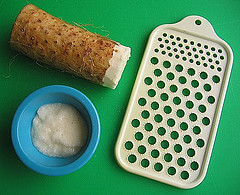 Ingredient spotlight: Nagaimo, or Japanese mountain yam, is thought of as an essential component of Osaka-style okonomiyaki, said to produce a tender end product. (Prepackaged okonomiyaki mixes use dried nagaimo or yamaimo powder for the same effect.) A mountain tuber, nagaimo or yamaimo is often grated and served with raw tuna, rice or soba. Grated nagaimo is called tororo, and has a slimy texture reminiscent of raw egg or chopped okra. I’m not a fan of this texture in general, but the sliminess disappears when it’s cooked in okonomiyaki batter. Sliced raw nagaimo is actually a little crunchy, and I quite like it. Some people develop itchy hands after handling raw nagaimo, so you can either wear rubber gloves or soak the peeled nagaimo in water with vinegar to reduce irritation (also prevents the nagaimo from discoloring). I’m not sensitive to it, so I just handle it normally and wash my hands afterwards. Click for the full okonomiyaki recipe and tutorial…

I took the photos below on my last trip to Japan, in a little mom & pop okonomiyaki restaurant with built-in tabletop griddles in Osaka’s Shinsekai neighborhood. Note the small bowl that each okonomiyaki was mixed in at the last minute, and two sizes of metal paddles: the large ones are for cooking, and the small ones are for eating with instead of chopsticks if you like. I usually use chopsticks to eat with, but the paddles are fun. To duplicate the tabletop cooking experience, use an electric skillet and turn it into a communal event. 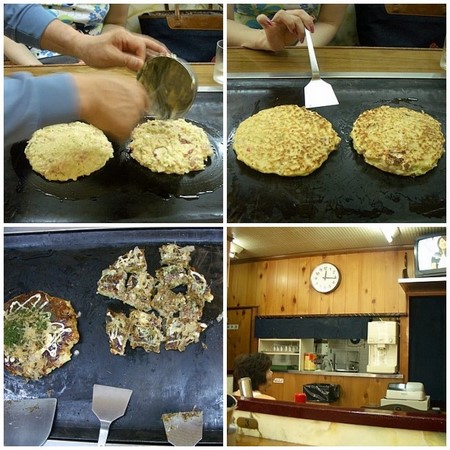