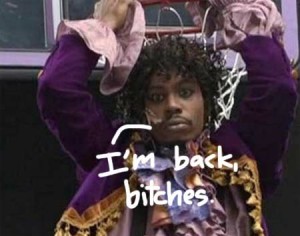 What did Dave Chappelle say about suddenly fleeing his hit show for some personal time in Africa? “I’m a difficult kind of dude,” and “People got to take inventory from time to time.” Yeah, that pretty much sums it up here too, but on a smaller scale.

When life throws you curveballs, sometimes you need to hunker down. That’s what I’ve been doing for the past few years. Dissolving a relationship, setting up a new life & home, finding my way and looking for a new focus. It’s still a work in progress.

Posting about my son’s bento lunches has been a lot of fun, and I was starting to become an insufferably public person before I stopped blogging. But odd things can happen when you anchor your public life on private life and family.

I encountered an odd kind of attention akin to stalking that I didn’t fully understand, and it freaked me out (#YesAllWomen). I went dark in an attempt to put an end to it. The unfortunate side effect is that I became fearful of my own blog and of interacting with strangers on the internet (no matter how friendly!). I pretty much stepped away from all social media, and instead turned my energies toward my son’s school and its Japanese program, getting more involved in the local Japanese community. Online ostrich time.

I feel bad about leaving folks in the dark about what was happening. I’d like to deeply apologize to readers, fellow bloggers, and friends, and express my gratitude for your patience, encouragement and support.

It’s with some trepidation that I venture back into posting now, but I have things to share. I recently met up with Thomas from Bento & Co. when he was in the States, and came away newly energized about bento. Read if you like, turn away if you don’t. But I’m bolstering up my courage and hope not to disappoint.