Categories Menu
Home » For Kids » How to make apple rabbits 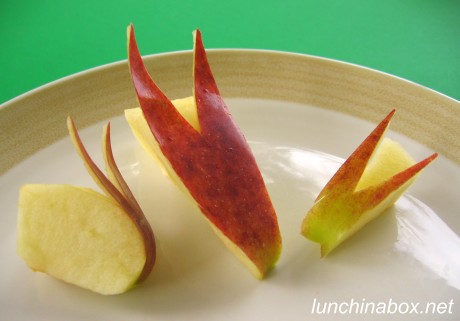 How to make apple rabbits 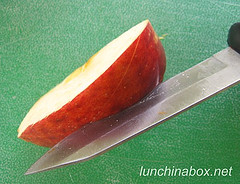 Making food into decorative shapes is a favorite children’s bento lunch technique in Japan, where it’s become an art form. Cutting fruit into fun shapes is one way to get your picky eaters interested in their food; I’m game as long as it doesn’t take much time or effort.

My three-year-old has recently decided that he doesn’t like apple peel, and so doesn’t like apple rabbits any more. In my farewell to apple rabbits the other day, reader Ahricat asked for some pointers on how to make them, so here’s a quick tutorial. Apple rabbits are basically just apple slices with the peel cut to resemble rabbit ears, and can be made in either full size or half-size to tuck into a bento lunch.

To make an apple bunny, first cut an apple into eight wedges and remove the core. With a sharp knife, cut a shallow V-shape into the skin about an eighth of an inch deep. If you’re making a half-size miniature apple rabbit, first cut the apple wedge in half so it’s short, then score a V-shaped incision in the skin with the tips of the ears pointing towards the squared-off, cut end. I like to start the tips of the ears about two-thirds of the way up the apple to expose a little apple ‘body’, but that’s just personal preference. Play around! 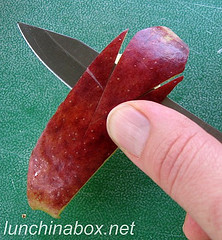 After making the V-shaped incision into the apple skin, run the knife just under the apple peel (a shallow cut), stopping at the base of the “V” halfway down the wedge. The excess peel should lift right off (you can snack on the leftover scraps if you’re inclined). If the peel doesn’t come off, run your knife along the “V” again until the peel is freed up. The remaining peel should look vaguely like rabbit ears.

The key to making the ‘ears’ curl up is to give them a short soak in ice water after cutting the peel (3-4 minutes, depending upon how thick you cut the peel). Feel free to omit this step if you’re running short on time, but you can build it into your morning lunch-packing routine pretty easily by starting the apple bunnies at the outset, and letting them soak in ice water while you pack the rest of your bento.

To prevent browning, I added lemon juice and a little Splenda to the ice water to tone down the sourness, but you could use lime juice, orange juice, cream of tartar, a ground-up vitamin C tablet, or even chili powder for the same effect. Dry the apple rabbits before packing, maybe affix a single black sesame or poppyseed ‘eye’ to the white side with a dab of honey for stability, and you’re set! 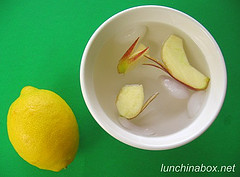 Anyway, Biggie out and happy voting! I’m actually out of town visiting my husband’s relatives in Florida right now, and will be away at my Dad’s with only occasional Internet access next week (Internet cafe in Oklahoma with a three-year-old, anyone?). My apologies in advance for being far less responsive than usual!

We interrupt this bento tip with a final shameless plea.

If you have a moment today, please click over to the respected 2007 Food Blog Awards and vote for Lunch in a Box in the “Best Theme“ and “Best Family/Kids“ categories (no registration required). Voting closes in less than 24 hours (11:59pm EST on Friday, Dec. 14), and I’m up against blogs like “Fatfree Vegan” that are twice my size. Help!