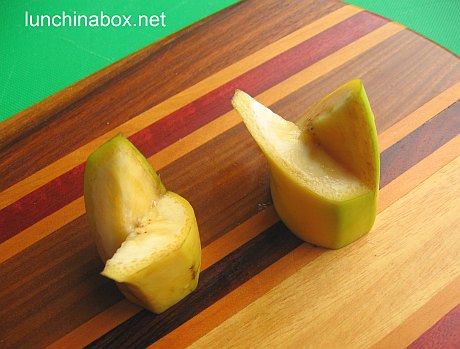 How to make decorative banana wedges

I don’t have anything against making children’s food cute as long as it doesn’t take me much time or effort (yeah, I’m lazy!). Like making little rabbits out of apple slices, this simple garnish that I found in a Japanese bento book is fast and makes a slice of fruit look interesting. Use it to pack a bite of banana in your bento lunch without worrying about a whole banana getting mushy in your bag. Of course, if you’ve got one of those Banana Guard gadgets popular in Japan, you don’t have to worry about a whole banana getting mushy, but this is a cheap, fun alternative. I’d say this could help coax picky eaters into eating banana, but I think bananas are already an easy sell. Am I wrong? (Click here for the full tutorial…) 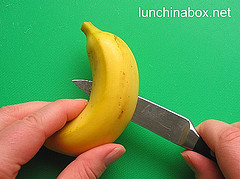 Use a sharp knife to make an incision right through the middle of the banana, but don’t slice to the very end. The longer the incision, the shallower the angle you’ll be able to make out of the points of the banana and the taller it can be. A two-inch incision gives you a lot of leeway. If using a full-size banana, first cut it in half and make the incision midway up one of the halves. (Note: For maximum safety, place the banana down on a cutting board and face the knife away from you.) 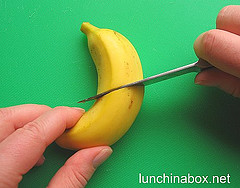 Angle the knife and cut halfway down into the banana. You should be able to feel when the knife makes contact with the first incision.

Turn the banana over and cut the other side at the same angle. The shallower the angle of the cut, the more pointed and pronounced the tips will be. 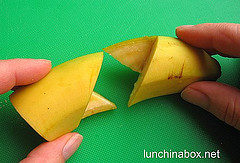 Separate the two halves, and dip the exposed banana in acidulated water to prevent browning when packed in a lunch. I dipped this in water with lemon juice and Splenda to cut the sourness, but you could also use orange juice, lime juice, cream of tartar, a crushed vitamin C tablet, or even chili pepper for the same effect.

If you want to stand both banana bits up on their ends in your bento lunch, cut the stem end to form a base, and make sure that your lid can close over the banana. If the banana is too tall for your container, cut a little off of the flat end to shorten it (or recut both sides at a wider angle. 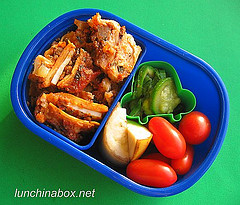