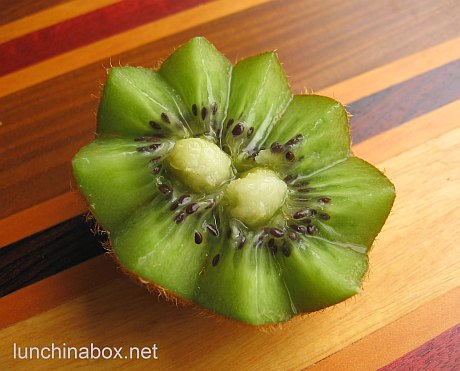 How to make zig-zag kiwi fruit

My series on simple garnishes for bento lunches continues with kiwi fruit. Kiwi fruit is high in vitamin C and can be found in both green and gold (more yellow and citrus-tasting than green). I usually cut kiwi into large cubes, but a reader suggested I try slicing one in half and sending along a spoon. This is appealing because when I cut kiwi into wedges, the fruit often turns a little translucent and softens in transit — keeping it mostly whole helps it retain its original character.

A simply cut kiwi is already visually interesting, but I got a kick out of this style when I ran across it in a Japanese bento cookbook. It took about one minute to cut, which is not unreasonable in the morning if you’re looking to change things up a bit. Add it to your repertoire with apple rabbits and decorative banana wedges! (Click here for the how-to…) 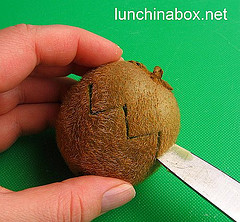 With a small paring knife, make small zig-zag cuts along the middle of the kiwi fruit to the center. Once you’ve cut all the way around, the halves will come apart easily but the center will look a bit untidy.

Looking around for something to act as a tiny melon baller, I settled on a quarter teaspoon measuring spoon with a rounded bowl, but you could also use a small tasting spoon (or a proper little melon baller). Scoop out one or two little balls from the center of the kiwi and just turn them over so the round part is on top. You’re done!