With this lunch I tried out a little DynoBytes sandwich cutter that my friends Dana & Jeff sent me from their local Bed Bath & Beyond. I’d seen these in my local supermarket before but hadn’t splashed out for one, so this was a guilt-free way of trying one out (thank you!). Essentially a specialized cutter, it removes the crust and creates two cut-out sandwiches of the same size and design, with minimal waste. This particular one is dinosaur-shaped (perfect as my son’s been studying dinosaurs in preschool lately), but I’ve also seen bear- and somewhat heart-shaped cutters. To use, the manufacturers tout making the sandwich first and then using the cutter to create the shapes and seal the edges, but I find that the sealing of the edges produces a sandwich that’s too dense for my personal taste (your mileage may vary). Cutting each piece of bread separately yields better definition and lighter bread if you have the patience for it, but I can see that this would be a pain if you’ve got multiple layers of fillings like cheese, veggies or meat. I tend to make Bug’s sandwiches with spreads, so it’s fine for my needs. Large cookie cutters would serve the same purpose, but probably with more waste as this is optimized for sandwiches. Here are some ideas on what to do with the leftover scraps. 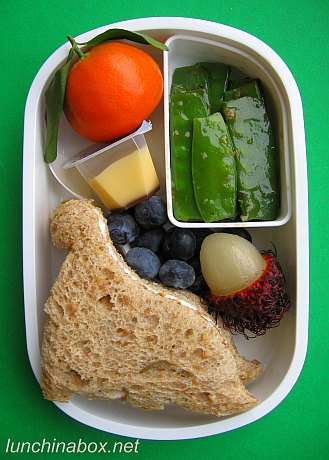 ) on whole wheat bread, rambutan fruit, blueberries, bite-size pudding cup, tiny tangerine, and sauteed snow peas with garlic and Thai oyster sauce. The shelf-stable Kiku Petit Pudding cups (like a little flan or creme caramel) can be found here and here online, and in Cost Plus World Market’s retail stores in the U.S.

Morning prep time: 7 minutes, using leftover snow peas. In the morning I just made the sandwiches, reheated the snow peas in the microwave, and cut the fruit open. (Click to read the full entry with Asvel bento box review…) 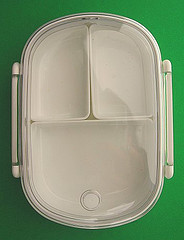 Packing: I used one of the box’s three removable subcontainers to pack the moist snow peas away from the fruit. If I didn’t have a subcontainer specific to the box, I could have used reusable silicone baking cups or disposable coated paper ones. In addition to cutting the rambutan peel around the middle, I freed it from the base and popped it totally out of its skin once to make it easier for three-year-old Bug to eat on his own. I tucked a tiny plastic spoon for the little pudding alongside the sandwich, and peeled the tangerine after I took the photo when I realized it was going to be harder for him to peel than a loose-skinned Satsuma. He’s only got so much time for lunch and he gets distracted when his friends finish before him and go play, so I try to make his food easy for him to eat.

Bento box: The lunch went into a new 490ml one-tier bento box with removable subcontainers from Asvel, a company that puts out sturdy, well-made bento boxes. The last Asvel box with subcontainers that I had lasted for years until one of the flaps wore out, so I’m hoping to have similar luck with this one. The other key feature with this box that I’m jazzed about is the steam vent in the lid. There’s a plastic stopper in the vent hole that can be removed if you need to close up a lunch before letting the food inside cool thoroughly. With airtight bento boxes, if you don’t cool the food before putting the lid on, condensation builds up inside, increasing the chances of food spoilage and the development of a vacuum inside of the box that makes it difficult to open the box (definitely an issue for children with less hand strength). Thanks to this design, I was able to position the hole in the lid right above the still-warm snow peas and close the lid without worrying (see the open vent and the steam on the lid in the photo below). BTW, the base and subcontainers are microwaveable, but not the lid. Thanks to Jen from the Delphi Forums bento board for getting this to me! Evidently she got it from Mitsuwa in San Jose. 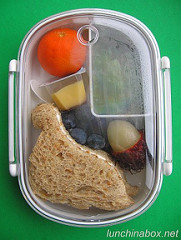 Verdict: Thumbs up over time. Bug ate the sandwich, tangerine and little pudding during preschool, leaving the rambutan, blueberries and snow peas until afterwards. He ate the fruit and a few of the snow peas as a snack. I’m still working on winning Bug over to Marmite. He ate the sandwich, but said he didn’t like the Marmite, which I’d spread very thinly inside. He liked the cream cheese, though, so thankfully that was enough to make him overlook the Marmite. I’ll continue to work on him!