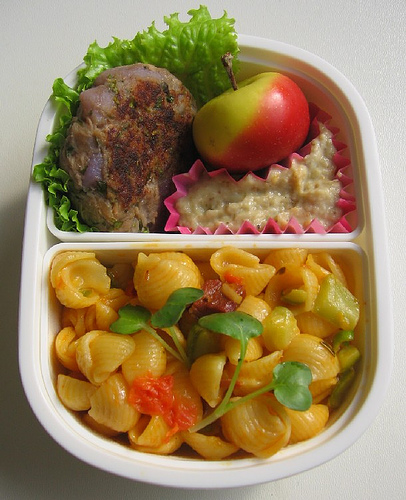 I finally got rid of the last of the leftover purple potato salad!!! Score. Today I’ve got a second way to get rid of leftover potato salad: turn them into little fake latkes with tuna and pan fry them. Giving your leftovers a makeover is a popular tip in Japanese bento cookbooks — it maximizes your payoff for the time you’ve already sunk into making dinner, but relieves the monotony of eating the same darn thing again.

Today’s lunch took five minutes to throw together, using leftovers and frozen homemade food. My son has a previously frozen faux latke (recipe below), a tiny apple, homemade baba ghanouj from dinner, and leftover shells and cheese (with sauteed zucchini/courgettes, cherry tomatoes, ham and kaiware garnish — heated in the microwave with a teaspoon of milk for texture).

Mix everything together in a small bowl, chopping any chunks of potato that are too large. Divide the mixture into three parts, and shape each third into a small disc in the palm of your hand. 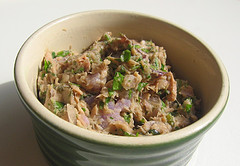 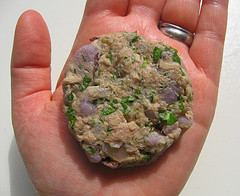 Heat a nonstick frying pan on medium heat, and lightly coat with vegetable oil. Pan fry until golden brown on both sides. I saw a Japanese variation of this recipe, using soy sauce for the balsamic vinegar, and aonori for the parsley (the two patties in the rear of the photo below are the Japanese version, the one in the front is the Western). Serve with a dipping sauce if desired (my two-year-old gives a big thumbs up to tartar sauce or tonkatsu sauce).

After frying, these can be wrapped in plastic wrap and frozen to have a fast protein/starch item on hand for lunches. When ready to eat, just pop in the microwave (or let them defrost naturally in the lunch or refrigerator). You can also make these with leftover potatoes, although you’ll want to add additional flavoring (salt/pepper, a splash of vinegar and olive oil or mayo — maybe your favorite salad dressing). 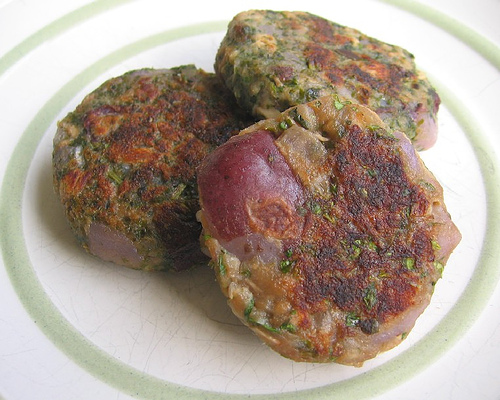