This was a super-fast toddler bento (less than 10 minutes to pack both mine and my son’s). I nuked frozen homemade meatballs, steamed the broccoli and kabocha squash in a microwave mini steamer (photo behind the cut), and dropped in a foil cup of leftover spaghetti I portioned out for freezing.

Taking a page from Japanese bento cookbooks, I froze leftover spaghetti in foil liners set in mini muffin tins. Once they were frozen through a couple of hours later, I put them in shallow tupperware for longer-term storage. This way I have a cache of homemade pasta ready to drop into my son’s lunches when I’m looking for a red-colored dish. In the morning, I just put a frozen-solid pasta cup into the bento, and it’s totally thawed a few hours later when we’re ready to eat. If I were going to microwave them I’d have used paper cups instead of foil.

As for taste, I ate my bento today (with the frozen pasta) and had a bite of my son’s (with non-frozen pasta). They tasted about the same, no significant difference in taste/texture. I wouldn’t leave them in the freezer for longer than a few weeks, though — if they got freezer burn that’d definitely affect the taste. EDIT: I now like these with a little extra sauce in a small container on the side to remoisten the pasta.

I made today’s broccoli and kabocha in this mini steamer for the microwave — I picked it up at Daiso for US$1.50. It’s sold as a steamer for meat buns, but it’s just the right size for steaming small amounts of vegetables or dumplings for lunch. It speeds up steaming time by 50%. You put a tablespoon of water in the bottom, place the steam tray on the bottom, put the veggies in, then cover (aligning the steam holes to allow venting). Nuke for 1-2 minutes and let it stand for a couple of minutes afterward to steam. It can also be used for storage if you twist the lid so that the steam release holes are not aligned. Amazon lists a similar one here and a large one here.

Here’s my lunch — the same as my son’s except it’s got roast pork instead of meatballs. 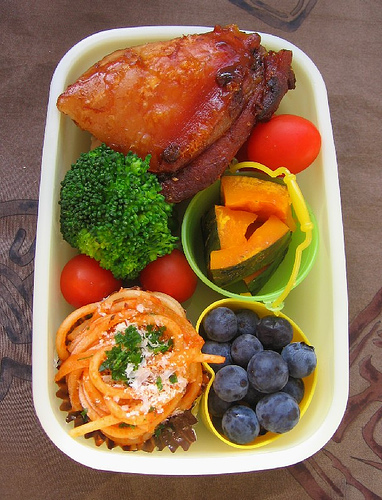