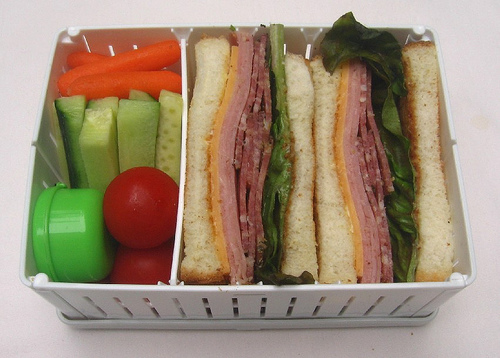 Yesterday I tried out a new collapsible sandwich holder that I got for $8 from my local Sanrio store (yup, the cover is the Shinkansen character). I’d seen these in Japanese bento cookbooks before but had never noticed them here in San Francisco. I was initially puzzled by the ventilated sides but it turned out there’s some method behind the design madness. Here’s yesterday’s lunch packed up:

Collapsed, and assembled (it’s quite deep, and the divider is movable): 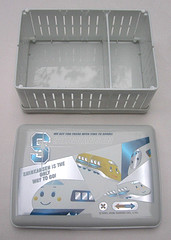 When I saw this, I was excited that it would collapse flat after lunch and slip into our regular bags. When I opened it up, though, I had a number of doubts, primarily — what’s up with the holes in the sides? Wouldn’t it make the bread go stale and litter crumbs all over in transit? What side dishes would work without leaking juice? How does it stay together? I’d seen these cases in Japanese cookbooks and bento blogs before — now it was time to go back and do my homework on the details.

Our initial run showed no crumbs in my husband’s new black bag (that he unceremoniously shoves his lunches into vertically for a subway commute). Also the bread didn’t go stale — evidently the ventilated sides are to keep the bread from going soggy, especially if the filling is initially warm or moist. The books and sites I saw with these cases all included dry side dishes like a piece of fruit, a wrapped cheese, etc., so I did likewise. I wasn’t impressed with the security of the latch, so I put an elastic band around the whole thing. Next time I’ll pop the entire case inside a kinchaku (lunch carrying bag) just to be sure nothing gets out. And my husband, who generally has an allergy to “cute” or “kawaii”, has decided that the Shinkansen character on the lid makes it cool! Very surprising! (Edited to add: I’ve since tried lining these sandwich cases with a piece of plastic wrap or waxed paper to contain crumbs with good results.)

Final verdict: interesting idea — I’ll continue to use it for sandwiches (especially for bringing along a meal for a plane trip), but won’t rule out the Laptop Lunchbox or other containers for sandwiches, especially if I want to pack a moist side dish. If I see a collapsible sandwich case without holes on our trip to Japan, I’ll pick it up and give it a whirl.