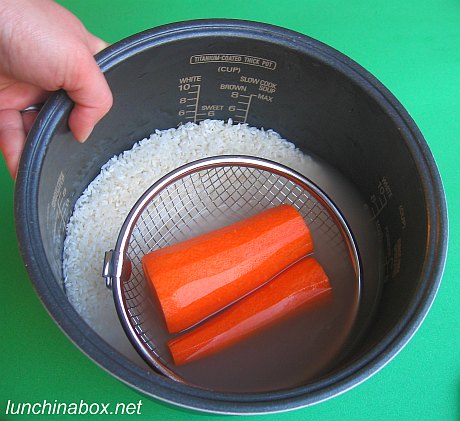 Rice cookers: Not a one trick pony

Rice cookers can make more than just rice. In college, my Chinese roommates and I used to get around dorm rules against burner cooking in our rooms by making things like ramen and fish ball soup in our rice cookers. And when I lived in Japan in the 90′s, I worked in Japanese consumer electronics companies whose higher-end rice cookers had settings for Chinese rice porridge (congee or jook). But my coworkers didn’t seem to use their rice cookers for anything other than rice, reminding me of Betty Crocker & Morinaga’s failed push to sell cake mix for rice cookers in Japan.

So I was intrigued to come across this tip from a Japanese-language book on how to save energy by steaming slow-cooking vegetables on top of rice in your rice cooker. This is convenient if you already use a rice cooker to prepare rice — you can steam some vegetables for meals at the same time. Along the same lines as multi-boiling, multi-broiling, multi-frying or multi-grilling, this is a handy way to kill two birds with one stone. (Click to read cooking directions…)

Cooking: To cook a whole carrot or other hard vegetable, prepare your rice for cooking as usual and put it in the rice cooker pot with your standard amount of water. Choose a clean metal strainer that’s small enough to fit inside without touching the rice cooker’s inner pot, which would damage the inner pot’s protective coating. Set the strainer right on top of the rice with a whole washed carrot inside, which keeps the vegetable suspended above the rice so that it steams rather than boils. Cook the rice according to your rice cooker directions. When the rice is ready, the whole carrot will be steamed and nutrient loss minimized as the rice absorbs the cooking water. The Japanese book used brown rice, but my three-year-old prefers white rice so that’s what I went with. I did detect a slight vegetal smell to the cooked rice, but it wasn’t unpleasant. The Japanese book also shows how to make a hard-boiled egg by nestling a washed egg right down into the rice and cooking water. I haven’t tried this out as I’m very content with my current method of boiling eggs, but it’s interesting nonetheless. My fancy yet reasonably priced rice cooker

came with a steam tray that sits in the top of the rice cooker’s inner pot, so I could have used that instead of the metal strainer. Other high-end rice cookers (see article on Japan’s rice cooker trend) now have settings for cake, slow cooker/soup, brown rice, rice porridge, etc., so there’s no shortage of possibilities for different kinds of cooking in a rice cooker.

Recipes: For other rice cooker recipes, Panasonic/National has a free online cookbook here with tested gourmet-type recipes, Cooks.com has a number, and then there’s always The Ultimate Rice Cooker Cookbook: 250 No-Fail Recipes for Pilafs, Risottos, Polenta, Chilis, Soups, Porridges, Puddings and More, from Start to Finish in Your Rice Cooker

. Do you have a favorite rice cooker recipe? Share it or a link in comments!