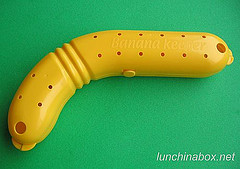 No, this isn’t a toy gun or someone who’s happy to see you. It’s a cheap banana carrier that’s designed to carry a single banana in your bag without bruising.

I’d love to pack bananas more often as an after-school snack for my son, but I’m so rough with my bag that they tend to get mangled when I throw them in unprotected. The problem is solved with a US$1.50 case from the Daiso discount store in Daly City, CA (branches internationally), where it’s cheaper than similar products I’ve seen like the Banana Guard or the Banana Bunker. (Read on for the full review and my test results from ripening bananas in the microwave.)

As I discussed in my earlier post about miniature fruit, packing whole fruit during hot weather is safer from a food safety standpoint than cut fruit. This doesn’t stop me from throwing in an occasional decorative banana wedge dipped in citrus juice to keep the fruit from browning, but it doesn’t tend to get very hot in San Francisco and I try to use an insulated lunch bag with ice pack when packing highly perishable food. 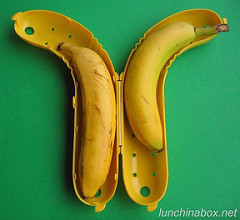 The hard plastic case has little ventilation holes and opens up to reveal a long cavity that’s shaped to accommodate both straight and curved bananas (shown at right). It’s a little larger than I expected, but the length is what allows it to hold differently shaped bananas. I haven’t had a problem getting it into a messenger bag, but it would be too large for a small kinchaku lunch bag. You can get a feeling for the size of the case from this demo video on BentoTV.

My only complaint is that it’s difficult for my three-year-old to open by himself, so I won’t be sending this to school with him until he gets more proficient with it. On the other hand, I probably wouldn’t pack a whole banana with his lunch at this age anyway as his appetite is still small. So by the time he can open the case by himself he might have a bigger appetite.

SIMILAR PRODUCTS: The Banana Guard comes in different colors, and is priced at CAN$6.99 for one, plus $14.95 shipping to the U.S. (CAN$21.94 total) that takes about 4-6 weeks to arrive. They sell a lot of these in Japan, and offer international shipping. The company also has small and medium-sized round “Froot Guards” for packing delicate fruit like peaches or nectarines. Check out this Instructable how-to on making your own banana holster with a Banana Guard!

Banana Bunker: Be careful about clicking on this link at work, as it looks more suggestive than it really is! It’s a smaller flexible case in different colors that’s open at both ends. Priced at US$4.99 for one plus $8.55 shipping to the U.S. (US$13.54 total), the company offers international shipping.

If there’s no Daiso near you, you might try an eBay search for“banana guard” or “banana case”

, but beware of overpriced sellers. (Disclaimer: I have no commercial affiliation with any of the companies mentioned in this post.) Do you have a trick for protecting delicate fruit whole? Share it with us in comments! 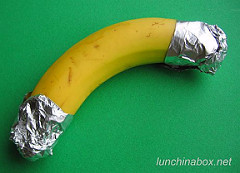 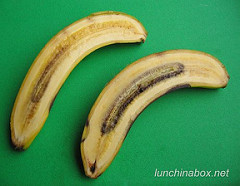 RIPENING A BANANA IN THE MICROWAVE: I ran across an intriguing banana ripening tip in a Japanese-language cookbook and Barbara Kafka’s Microwave Gourmet

, and decided to test it out. Microwave Gourmet gives a qualified recommendation for warming an unripe banana for one minute in a medium-power (500-600W) microwave oven, using aluminum foil to shield both ends from over-warming (shown above). (EDIT:  Kafka writes that the limited use of aluminum foil to shield part of the food works because microwaves can’t pass through metal, but cautions that metal pots and ceramics decorated with gold or other metals shouldn’t be put in the microwave oven. “A lot of metal may create an arc, or flash of light, in the oven; this won’t kill your oven, but it is unpleasantly dramatic.”)

To test this method out, I tried warming somewhat unripe (but mostly yellow) bananas in my 1200W microwave at 50% power for one minute, and at 100% power for 30 seconds. I also tried microwaving some really green unripe bananas.

RESULTS: I wouldn’t use the microwave technique for bananas to eat plain, out of hand. Even the best ones still retained some unpleasant texture. I’d reserve this technique for ripening only slightly green bananas for purees or baking.

The really green unripe bananas never got edible for me, even after increasing the power level and time in the microwave. Faring better were the slightly unripe bananas, with the one heated at 50% power for one minute (shown in the upper left of the cross-section photo) coming out softer, more flavorful, and less black than the other. The banana warmed at 100% power in my 1200W microwave came out black in the middle (shown above) and retained more of that unpleasantly raw mouthfeel of green bananas.

The skins of all of the bananas blackened in spots when warmed in the microwave, another reason why a microwave-ripened banana would be less appealing for eating out of hand. It’s a handy trick for when I’m baking banana bread or banana muffins and don’t have quite enough overripe bananas in the freezer, though!