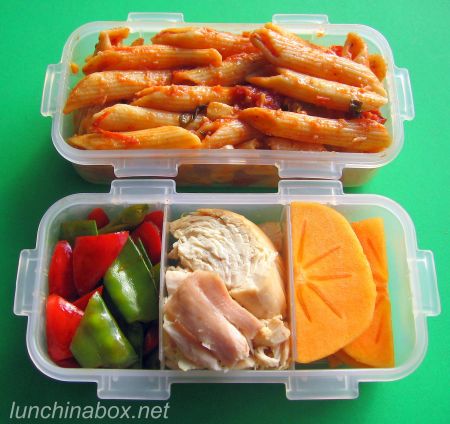 Contents of my lunch: Stir fried snow peas and red bell pepper with Thai oyster sauce, roast chicken, crisp Fuyu persimmon slices, and penne all’arrabiata with sun-dried tomatoes and pepperoncini. Not shown: a drink container filled with blueberry juice mixed with water. I also could have made a pasta frittata using the leftover pasta, instead of packing the leftover pasta as is.

Packing: After packing the bento box, I let the lunch cool with the lid off while I finished getting ready for the day. This reduces condensation inside the box for maximum bento food safety. With two growing and feisty kittens in the house, though, it’s become more difficult to just leave lunches out to cool — there’s a very real risk of finding a curious cat trying to sneak a snack. (Hooray for squirt guns for discipline!) Lately I’ve taken to putting the boxes on top of the refrigerator behind the knife block where the cats can’t get at them. Lunch packed in two 350ml tiers of a Lock & Lock bento set, with handy drink container and insulated carrying case. 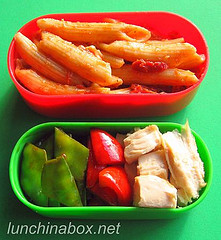 Preschooler lunch: My son’s bento contains the same food as mine, minus the persimmon.

Packing: The flavors of the chicken and vegetables were complimentary and my son isn’t very picky about food touching, so I dispensed with food dividers (edible or plastic) and separated the snow peas and bell peppers for a nice color contrast. (Confession: If I weren’t taking photos and blogging this, I probably would have just dumped the stir-fried veggies in together without worrying about color contrast…) Packed in two tiers (180ml and 100ml) of a 4-tier Thomas the Tank Engine nesting and stacking bento box set.

Verdict: Pretty good over time. Bug ate all of the pasta and snow peas, and most of the chicken at preschool. After school he ate the rest of the chicken and one of the peppers (and the sliced persimmon from my lunch!). I was surprised that he downed the spicy pasta at dinner the night before; it seemed to be fine as long as he just stuck with the pasta itself and didn’t eat the add-ins (sun-dried tomatoes, pepperoncini, etc.). If I hadn’t seen him wolf this down earlier I would have hesitated to pack something spicy that he might not be able to eat.