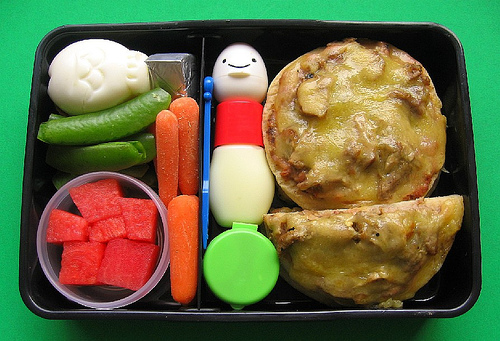 Contents: Homemade pork sopes with refried beans, pork with chile verde, monterey jack cheese, salsa in the little sauce container and Greek yogurt in the squeeze bottle shaped like an egg (we’re out of crema). The portion to the left has a boiled egg shaped like a fish, cheese triangle, sugar snap peas, carrots and watermelon.

Prep time: 20 minutes total for three lunches (making just one lunch would probably have taken 10-12 minutes). I made the sopes with all leftovers, so the most time-consuming part was frying the thick tortillas with thick edges (store-bought in sope form) and assembly. I ran them under the broiler to melt the cheese, making them more stable for packing. You can use all kinds of toppings for sopes — they’re quite versatile. Get creative! The shaped egg was the last of a batch I made earlier this week, so that was in the fridge in a mold.

Packing: I packed this large lunch (actually dinner) for my husband in a 940ml box, and put the juicy watermelon in a tiny lidded container to contain juices that might get on the sopes and make them soggy. Basically, packing this meal was an exercise in gap-filling, using sauce containers and hard veggies.