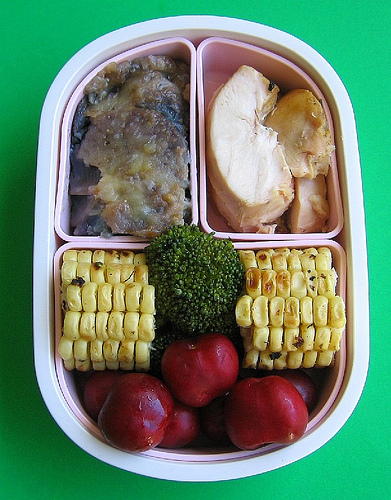 Corn on the cob bento lunches

Contents of Bug’s lunch: Purple potato gratin (scalloped potatoes), grilled chicken breasts, grilled corn, steamed broccoli with orange vinaigrette, and the last of the cherries. Not shown: a small side container of cut watermelon.
Morning prep time: 4 minutes, using leftovers. This morning I cut an ear of leftover grilled corn into segments and boned/sliced a leftover chicken breast. I cut the gratin into a shape that would fit into the sub-container, and cubed some already cut watermelon.

Packing: Cutting the corn on the cob into segments makes it good for little hands and a compact lunch container. The watermelon went into a side container so that the juice wouldn’t leak onto the savory food. The bulky corn on the cob required a slightly larger container (430ml) than usual for a two-year-old, according to the bento box size guidelines.

My lunch is the same as Bug’s. The cherries act as color and gap-filler to stabilize the lunch for transport. At 480ml, it was a little small for me, so I bought a tuna onigiri (rice ball) at a local Japanese market after playgroup and packed a side container of cut watermelon.On a tangent, the box that I packed Bug’s lunch in today broke — one of the plastic flaps busted that secures the lid. I’m annoyed because that was the third box flap that broke this month, all single-tier boxes of around 500ml. The first two were very cheap (US$1 to $5) so I figured they weren’t made solidly, but I’m surprised at the well-made Asvel box with the sub-containers. I think need to reexamine both the design and how I treat them (washing and transport). This is definitely a point in favor of boxes with different lid designs, like the Lock & Lock watertight seals, tight-sealing plastic sub-lids, one-piece flap lids without moving parts (like the big black men’s Asvel 940ml box), etc.