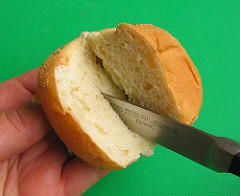 morning I just cut the mangoes and made the sandwiches. Tip on making sandwiches with dinner rolls: cut them in half, and use a knife (or your fingers) to remove some of the soft bread inside. This makes room for the filling and holds it securely inside the sandwich, especially handy with soft fillings that fall out such as egg salad or tuna salad. I used a similar technique with tuna salad sandwiches on ciabatta rolls, and a different technique in the preschooler lunch below.

Packing: The dinner rolls were small enough to fit whole inside of a regular bento, so I 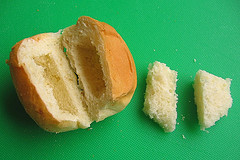 packed them in the Lock & Lock lunch set (two 350ml containers and a drink container). My little squeeze bottle for ketchup was too large to fit in this box, so I tucked in a spare ketchup packet that I’d saved from restaurant take-out. Putting ketchup on the sandwich at the last minute helps keep the bread from getting soggy. The little red pick was for the fruit (no need for a full-size fork).

Contents of Bug’s lunch: Same as mine, above, but with a cherry tomato to plug the gap, and the egg is shaped like a pig using ice cream sandwich molds as described in my old tutorial. Bug decided he didn’t want the lettuce in his sandwich, but everything else went down the hatch successfully. Hooray!

Packing: Mea culpa! There was really no need for the paper food cup under the egg today, I just added it for color contrast in the picture. More environment-friendly alternatives would be something edible like lettuce, a silicone muffin liner, or just popping the egg straight into the box.