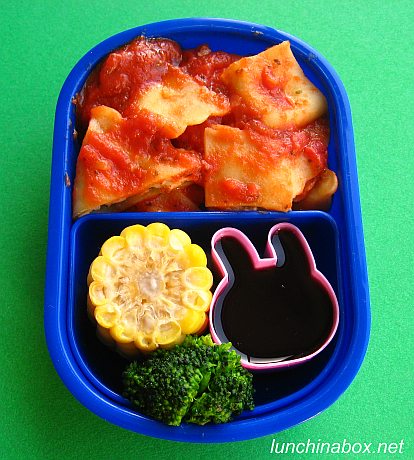 Corn on the cob bento lunch

Kids love corn on the cob, but a whole ear is simply too big to fit inside of a bento box. One way you can include it in a bento lunch is to simply cut it into manageable segments like I did below, or even split it down the middle of the cob so that the pretty rows of corn kernels are all facing up if you have a shallow box.

My three-year-old is happy to eat corn on the cob as is, but I must confess to a little bit of bento accessory lust over flat corn holders that fit into a bento box. Maybe one of these days I’ll splurge out on cute football- or animal-shaped corn holders

or other unusual corn holders on Amazon

, but not quite yet. I’m a little concerned that Bug would remove them and wind up stabbing someone at preschool, which is why some schools have rules against sending along pointy food picks in the children’s lunches. 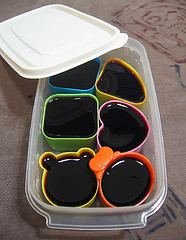 Contents of preschooler bento lunch: Spinach & mozzarella ravioli in roasted garlic and tomato sauce, corn on the cob segment, steamed broccoli with vinaigrette, and homemade juice jello jiggler cup (from 100% blueberry and raspberry juice). I made these jello cups with Knox gelatin, but you can make a vegan version that stays solid at room temperature using agar agar seaweed (kanten in Japanese) as a thickener instead.

Morning prep time: 12 minutes, using leftover corn on the cob and a juice jello cup I’d made previously with my three-year-old. In the morning I multi-boiled the frozen ravioli and broccoli together in a very small pot for speed and energy efficiency. I’ve written about reading a study finding that microwave-cooked broccoli loses a lot of its antioxidants, so right or wrong, I felt a little better about boiling the broccoli rather than steaming it in the microwave as usual. (Read on for packing details and an Anpanman oshibori hand towel…)

Packing: I cut the ravioli into bite-size pieces to make it easier for my preschooler to eat, and packed the lunch in a 360ml Disney Cars bento box with one subcontainer removed to accommodate a little more ravioli. Because I knew Bug’s hands would be getting messy with corn, I sent along a new Anpanman-themed oshibori damp hand towel he got as a birthday party favor from one of the girls in his preschool class (thanks Yukie!). I like the little case as it has a screw-off cap that’s very easy for Bug to open on his own. 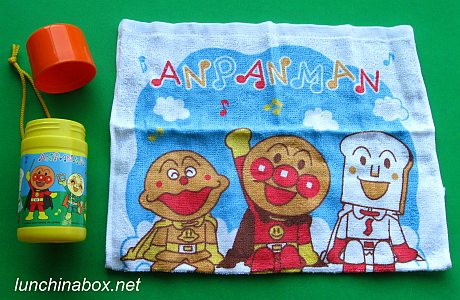 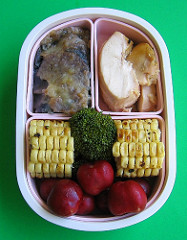 Verdict: Home run today, finally! Bug demolished everything at preschool, no leftovers. He told me afterwards that he likes smaller lunches that he can finish up at school, so going forward I’m going to try to be better about not overpacking (stay tuned!). If I gauge it right, I’ll need to start bringing a separate container of snacks for the playground after school instead of having him just finish up his bento.

FURTHER READING ON LUNCH IN A BOX: