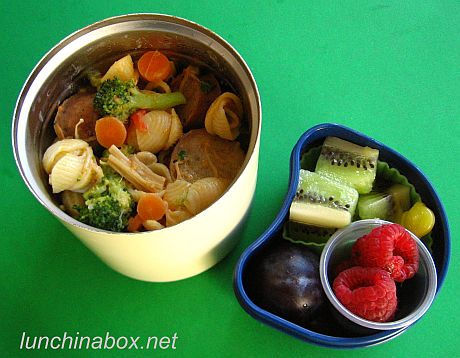 Morning prep time: 5 minutes, using leftover mac & cheese. In the morning I prewarmed the thermal food jar with hot tap water while I cut the kiwi and warmed the pasta in the microwave. I added a little splash of water to the pasta before warming to help revive the texture.  (Read on for packing details and an additional lunch of pork stew with fennel, leeks and prunes.)

Packing: I wanted to be able to keep the fruit chilled and the pasta warm in the same lunch, so I chose a thermal bento set for this lunch and tucked a few small ice packs cut from a flexible ice blanket down the side of the insulated bag to keep the fruit cold. The kiwifruit went into a reusable silicone baking cup, and the delicate raspberries went into a hard-sided plastic condiment cup (the lidded kind that often come with pizza delivery, filled with cheese or crushed red pepper). I tend to reach for a hard-sided subcontainer when packing delicate fruits to avoid fruit mush after my son swings his lunch bag around and drops it upside down (d’oh!). 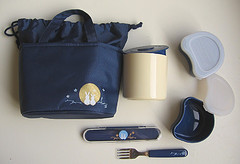 I packed the lunch in a 560ml thermal bento set (similar sets sold here) with one container removed, bringing it to 400ml — more in line for a four-year-old’s appetite according to the bento box size guidelines. You can achieve the same effect by using a small side container and a thermal food jar , commonly available from stores like Target or Walmart without the shipping.  (Click any photo for a larger view.)

Verdict: Mostly positive, with Bug eating everything but the raspberries and the prune at preschool. He ate the plum after school as a snack, but by the time I picked him up the raspberries were starting to look a little soft and past their prime despite my best efforts. I’m souring on packing raspberries in Bug’s lunches as they’re just so delicate it’s difficult to keep them appetizing after being transported and swung around in a bag. 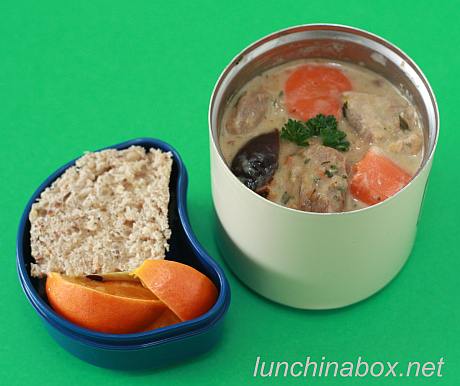 Contents of preschooler bento lunch: Pork stew with fennel, leeks and prunes, plus a side of bread for dipping and orange slices. I used a recipe from The Best Make-Ahead Recipe

cookbook, by the folks at Cook’s Illustrated.

Morning prep time: 5 minutes, using leftover stew. In the morning I heated the stew in the microwave while pre-warming the thermal food jar with hot tap water, and sliced the fruit.

Packing: I cut the crusts off of a single slice of bread for Bug; he’s not a picky eater or anything, but he’s not a fan of crusts (what is it with kids and crusts?). To make the orange wedges easier for my four-year-old to eat, I sliced most of the way between the peel and the flesh of the orange. The lunch is packed in a 560ml thermal bento set with one side dish container removed, bringing it to 400ml.

Verdict: Not bad. Bug ate the orange and all of the stew at preschool except the prunes, but left the bread. He didn’t like the prunes when I served the stew at dinner, so nothing new, but I want to keep exposing him to different things in case he changes his mind.