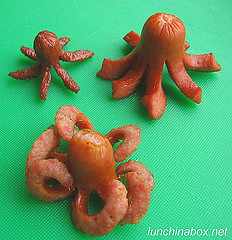 Some Japanese readers commented on my article on how to make an octodog (octopus-shaped hot dog) that deep frying actually gives the most attractive results. I’d passed over oil-based cooking methods in an effort to produce a healthier octodog, so I decided to give them a go here for the sake of completeness. Japanese arabiki sausages with natural casings (in the foreground) showed the most pronounced difference over boiling — the deep-fried version has fantastically curled legs that really do evoke an octopus. (Click for the full review.)

The octodogs to the left of the chopstick below were pan-fried with about a tablespoon of oil, and those on the right were deep fried (see the earlier entry for sausage types). Compared to boiling, both frying methods produced a crispier exterior that was nice in the larger hot dog, but unpleasant in the smallest cocktail sausage. My texture-sensitive three-year-old wouldn’t eat the arabiki sausage legs and the smallest cocktail sausage, though, saying that they were too hard for him. 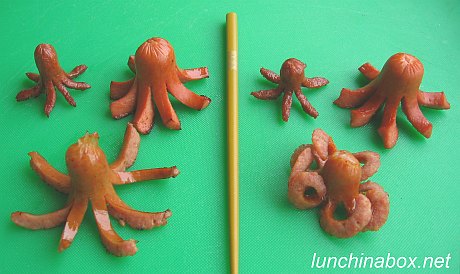 Compare the fried versions above with the water-cooked versions below (pan-fried with 1/2 cup water on the left, boiled on the right). While it’s true that deep frying produces more attractively curled octodog tentacles, I still prefer boiling them in water for health reasons. Boiling doesn’t add oil and even renders off some of the fat from the cut sausages. I already feel that processed meats aren’t the healthiest lunchtime option, so I’ll take every advantage I can get! 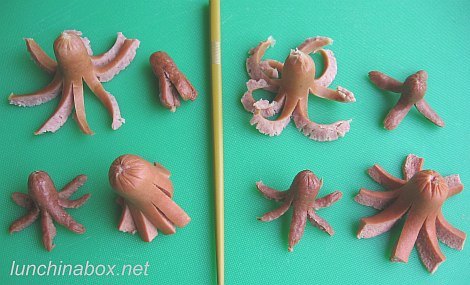