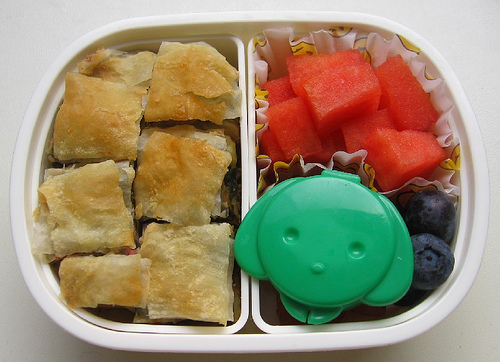 No speed bento tips today, just a regular bento for my son. Packed in a 300ml box, we’ve got leftover homemade bourek (savory Turkish phyllo pie) with two layers: one is cheese, the other is Swiss chard with pine nuts and currants. The right divider holds garlic Greek yogurt, watermelon and blueberries. My son has a bottomless pit for bourek — he ate all of this and asked for more (big hit!).

Last night when we were cleaning up after dinner I sped up bento prep by cutting a piece of bourek (easier for my son to eat), packing it up directly in the bento box, and filling up the little sauce container with garlic yogurt. So I had an almost-made bento waiting in the fridge (almost makes up for all the time I spent making the bourek in the first place!).

Two-layer Cheese and Swiss Chard Bourek
(based on recipes in The Art of Turkish Cooking by Neset Eren, and The Cooking of the Eastern Mediterranean by Paula Wolfert)

1. Make the chard filling A: Heat a large skillet, and add the whole chard leaves still slightly wet from washing. Cover the pan and cook until wilted — a few minutes. Drain the leaves, squeeze dry, and chop coarsely. In the same skillet, heat half the vegetable oil and add the grated onion. Cook over medium heat for 5-6 minutes, then add the remaining vegetable oil, and wilted/chopped chard leaves. Cook, stirring, for 3 minutes. Transfer to a mixing bowl to cool.
While the chard cools, prepare the cheese filling.

2. Make the cheese filling B: In a medium bowl, mash the feta cheese and cream cheese together with a fork. Add Cheddar, eggs, butter, milk and parsley and mix well.

3. Finish making the chard filling A: Once the chard/onion mixture has cooled, add the pine nuts, currants, cheeses, sugar, milk, cumin, salt/pepper, and eggs to the bowl and mix well.

4. Preheat the oven to 350 degrees F once both fillings are prepared, and melt the butter (either in the microwave on reduced power, or on the stovetop)

5. Grease or butter a 12 x 15 inch baking pan (or roasting pan). It also works in a lasagna or cake pan half this size, you’ll just need to cut the phyllo sheets in half before assembling (bourek won’t be quite as crispy & flaky then, but it’ll still taste good).

8. Bake for 30 minutes or until golden brown. Serve with plain or garlic yogurt (1/2 pint thick yogurt mixed with 1 minced garlic clove and a dash of salt).