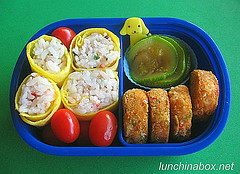 Newsweek: Are bento lunches a trend?

Are bento lunches becoming a trend in the U.S.? I think we’re starting to see indications of that, as shown by this article in Newsweek magazine about bento boxes for the preschool set.

Newsweek contacted me a few weeks ago to discuss the growing popularity of bento box lunches in the United States. They wound up running a photo of this bento lunch for my three-year-old, who attends a Japanese immersion preschool in San Francisco where bentos are the norm (click for the lunch’s full contents, packing details, and speed tips). On the spectrum of kyaraben food art to Lunchables or PB&J sandwiches in plastic baggies, hopefully my everyday speed bentos fall right in the middle (ideally made in under 10-15 minutes, but still appealing).

The article gave some online stores for bento gear, and summarized the Japanese nutritional “Spinning Top” and bento packing guidelines described in my guide to choosing the right size bento box. (One minor nit: traditionally a bento has one part protein, not one part “meat” as written in the article. You know, Japan being an island nation with lots of fish and tofu and all.)

Anyway, while I definitely see elements of the overall picture, I’m not sure if they’re sufficient to anoint bentos as a new trend. Maybe it just feels like the start of a bento boom because I’m in the middle of it. Am I delusional? Here’s my split-personality argument weighing if bento lunches are becoming significantly more popular in the U.S…

I know that it feels like a trend to me, but the jury’s still out. What about you? Have you seen any evidence that bentos are becoming more popular at your school, at work, or with your friends? Do you have a business that’s experienced a boom in bento sales over the past year? Or are we bento-packers just starting to attract attention disproportionate to our numbers? Tell us what you think in comments, or e-mail me privately at lunchinabox AT gmail DOT com if you don’t want to post publicly (I keep confidences). I confess, I’m really curious about your experiences!